Stand-up comedian, actor and writer Bert Kreischer, whom Rolling Stone named 1997’s “Number One Partier in the Nation,” is bringing his Hot Summer Nights Tour to Colorado Springs next month for a drive-in comedy event in The Broadmoor World Arena parking lot on Friday, October 9 at 7 p.m.

In addition to having three stand-up specials (“Hey Big Boy,” “Secret Time,” and “The Machine”), streaming globally on NETFLIX; three podcasts (“Bertcast,” “2 Bears 1 Cave,” and “BillBert”); a YouTube cooking show (“Something’s Burning”); and a book (Life of the Party: Stories of a Perpetual Man-Child (2014)); Kreischer is enjoying sold-out success across the country with his Hot Summer Nights Tour which launched in June 2020 in drive-in movie theatres nationwide.

Lauded as one of the best storytellers of his generation, Kreischer seamlessly and sincerely shares anecdotes about his family and fatherhood in his routine while showing his ability to prove “that there’s a way to take his [party-boy] antics into middle-age,” (Forbes). 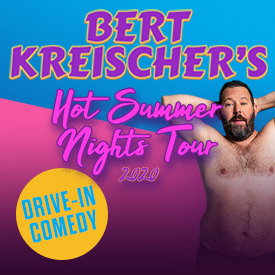 Drive In Comedy
Get Ready for Comedy